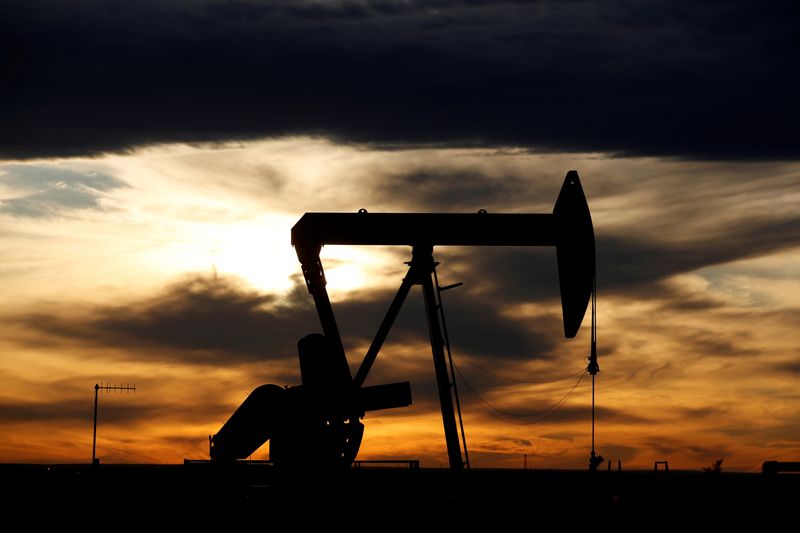 © Reuters. FILE PHOTO: The sun sets behind a crude oil pump jack on a drill pad in the Permian Basin in Loving County

TOKYO (Reuters) - Oil prices fell for a third day on Thursday as a surprise build in U.S. crude inventories and a resurgence of COVID-19 cases in India and Japan raised concerns that a recovery in global economy and fuel demand may slow.

Both contracts dropped more than 2% on Wednesday, closing at their lowest since April 13. They are down more than 3% so far this week.

"Oil prices have been under pressure this week due to growing worries that surging number of COVID-19 cases in India and Japan will slow a recovery in fuel demand in Asia," said Toshitaka Tazawa, an analyst at commodities broker Fujitomi Co.

"The market sentiment was further battered by the EIA's weekly data that showed an increase in U.S. crude oil."

India, the world's third-largest oil user, on Wednesday reported another record increase in its daily death toll from COVID-19. Japan, the world's No.4 oil importer, is considering a state of emergency for Tokyo and Osaka as new case numbers surge, broadcaster NHK reported.

The Organization of the Petroleum Exporting Countries and allies led by Russia, a producer group known as OPEC+, are heading for a largely technical meeting next week in which major changes to policy are unlikely, Russian Deputy Prime Minister and OPEC+ sources said.

"Earlier this week, the market rose briefly on news of Libya's force majeure on exports, but concerns over the spread of the pandemic in Asia are outweighing the Libya's news now," Fujitomi's Tazawa said.

Libya's National Oil Corp (NOC) declared force majeure on Monday on exports from the port of Hariga and said it could extend the measure to other facilities due to a budget dispute with the country's central bank.