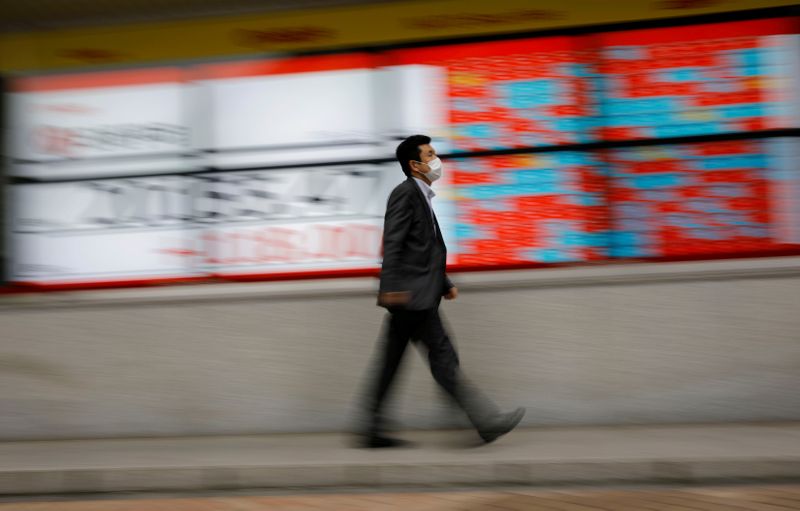 © Reuters. FILE PHOTO: A man wearing a protective face mask, following the coronavirus disease (COVID-19) outbreak, walks in front of a stock quotation board outside a brokerage in Tokyo

Asian share markets began the week with a cautious tone on Monday as the relentless spread of the coronavirus finally made investors question their optimism on the global economy, benefiting safe harbour bonds and the U.S. dollar.

Wall Street had faltered on Friday as some U.S. states reconsidered their reopening plans. The global death toll from COVID-19 reached half a million people on Sunday, according to a Reuters tally.

About one-quarter of all the deaths so far have been in the United States, with cases surging in a handful of southern and western states that reopened earlier.

"The increase in U.S. COVID-19 infection rates has dented momentum across markets despite the improvements in the global economy, which continues to beat most data expectations," wrote analysts at JPMorgan (NYSE:JPM) in a note.

"Our strategists remain sanguine and recommend to buy on dips but also selectivity," they added. "Traditional hedges like JPY vs USD, USD vs EM FX, gold and quality stocks are still outperforming this month. We stay overweight U.S. equities but move EM equities to neutral and stay neutral U.S. credit."

Sovereign bonds benefited from the shift to safety with yields on U.S. 10-year notes falling to 0.64%, having briefly been as high as 0.96% early in June.

The U.S. dollar went the opposite direction, rising to 97.461 against a basket of currencies from a trough of 95.714 earlier in the month.

It is an important week for U.S. data with the ISM manufacturing index on Wednesday and payrolls on Thursday, ahead of the Independence Day holiday. Federal Reserve Chair Jerome Powell is also testifying on Tuesday.

"U.S. economic data will reinforce that the economy is through the worst of the recession in our view," said CBA currency analyst Joseph Capurso.

"But a double‑dip recession is possible if widespread restrictions are reimposed, leading to a surge in the dollar."

Oil prices slipped amid concerns the pandemic would slow the reopening of some economies and thus hurt demand for fuel. [O/R]